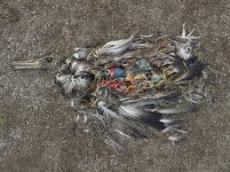 I am sitting here, with a month’s worth of rubbish. I am in the process of tallying it, to see what we really are accumulating, particularly in regards to plastic rubbish, plastic being more of a problem and more insidious in our environment, not to mention more disposable.

In terms of average household rubbish I am guessing it is a fairly small pile. We have a plastic shopping bag sized bin behind the sink cupboard door, and most weeks we don’t fill it. It mostly consists of packaging, from food wrapping such as bread, soiled cat litter (we compost the wet stuff), and plastic wrapping from mail, especially magazines. We also cleaned out the cupboards and a few items of expired food also made the garbage.

The recycling is mainly paper, from envelopes and mail debris, some junk mail catalogues, the local newspapers, cardboard packaging from milk and beer four packs; glass bottles, bottle tops, and discarded mail and envelopes. We have ten small boxes full – there is a lot more than the rubbish.

Why are you bothering, I hear you ask?

I am bothering for a number of reasons.  Firstly, it is useful to see just how much rubbish we accumulate. Whilst our weekly rubbish-holding plastic shopping bag that is two thirds full of what is mainly plastic packaging may not seem much, times it by 52 and it becomes a small mountain over the course of a year. That’s a lot of non-biodegradable stuff heading for landfill. It is sobering to contemplate it. It is even more sobering to think of the resources that went into making this plastic. If you are wondering what this means, have a look at Hungry Beast’s life cycle of a plastic bottle at http://www.youtube.com/watch?v=B19zvES7RC8

Secondly, looking at it and counting it reminds me we live in a disposable society. I am amazed at how commercially produced food portions are getting smaller and smaller and more and more packaged. There seem to be far more individually wrapped processed food products on the shelves of the super markets now, things like single breakfast bars, chocolates, biscuits and even single-serve cereals. Cheese, yoghurt, rice pudding, soup, tuna and baked beans all come in single serves, to name but a few. Apparently we have lost the will to drink tap water, needing instead plastic bottles of water and gaudily coloured products for allegedly increased stamina. Buying in bulk is getting harder and buying in cardboard, paper and glass is becoming more of a challenge.

Thirdly, it appears almost impossible to send a magazine through the mail without a protective plastic bag. Why? It is not like plastic is the only protective covering. In our household, only The New Internationalist arrives in a recycled paper envelope. The Open Road, our Diggers’ Garden catalogue, the local free newspaper and a few other catalogues that have followed me to Wauchope all come plastic wrapped. Some are OXO plastic, but this is still only compostable in a commercial facility.

Lastly, I realised how much we rely on plastic to keep food fresh. Gladwrap (or its equivalent) has insinuated itself into our lives to such an extent that we depend on it to keep food fresh in the fridge, wrap our sandwiches, cover our cut fruit and in our case, package cats’ pet mince for freezing. It is also a useful thing to cover food being cooked in the microwave oven.

And this is just the waste. Looking at my cupboards, I have plastic storage, plastic crockery, plastic furniture, plastic bowls and plastic utensils. My cleaning products, medications, and my bathroom products all come in plastic. There are plastic bits and pieces in our garden equipment. And the list goes on. How on earth did my great grandmothers manage without the stuff? It is everywhere.

Over the last year I have become more and more aware of the damage that plastic does to our environment. Millions of tonnes of plastic enter our environment every year. This plastic pollution finds its way into our water ways and then into our oceans. It then hitchhikes on the ocean’s currents until it ends up either in the Great Pacific Garbage Patch or is eaten by marine life. It lasts longer than nuclear waste, taking up to a thousand years to break down in the environment, and turning into smaller and smaller pieces that don’t disappear. Unlike cardboard, paper or glass, plastic just doesn’t go away. It is stubborn stuff, and it is lethal stuff.

According to Clean Up Australia, every piece of disposable plastic that I have ever used is still hanging around somewhere today. Their statistics are sobering:

Planet Ark makes the point that the time we use a plastic grocery bag can be counted in minutes – however long it takes to get from the shops to our homes. But only an estimated 3% of Australia’s plastic bags are currently being recycled, despite recycling facilities being available at major supermarkets. Why? Are we lazy, or do we find many new uses for these bags – such as collecting household rubbish? And while this is commendable to reuse these bags, what happens once I dump them into the red bin and they trundle off to the Council tip?

Having asked this question, I needed to answer it. I discovered that we are not off the hook by disposing of our plastic bags in garbage bins. Approximately 30 to 50 million plastic bags enter the environment as litter in Australia annually. Of that litter, 47% is wind borne plastic litter escaping from the landfills where our garbage ends up.

Once windborne, it ends up in our oceans and in our environment. In the marine environment plastic bag litter is deadly, and kills many sea birds, whales, seals and turtles every year. And due to its longevity, when an unfortunate beast is killed by plastic it decomposes much faster than the offending plastic, which is then released back into the environment where it can be ingested and kill again.

One example Planet Ark gives in regard to the deadly nature of plastic as litter was a Bryde’s whale which died on a Cairns beach after ingesting 6 square metres of plastic – including plastic bags. This is potentially making my mind implode. Six metres? How did it find six metres of the stuff so readily?

And it isn’t just the ocean. Planet Ark also reports the story of a calf on a farm near Mudgee NSW, which died unexpectedly. The farmer carried out an autopsy and found 8 plastic bags in its stomach. The loss of this calf cost the farmer around $500. One has to ask how 8 plastic bags found their way onto the calf’s pasture.

The worst thing for me though was Hungry Beast’s clip on albatross chicks.  I was searching for something on the Great Pacific Garbage Patch and I came across this little documentary on Chris Jordan, who is a Seattle based photographer. He photographed the most heart breaking pictures of dead baby albatross on the Midway Atoll (http://www.youtube.com/watch?v=D7vHrMsnRFA). All of them had died from being fed plastic litter by their parents, who are unable to tell the difference between pieces of plastic and small fish. I sobbed the first time I saw it. It still makes me cry. The death of all these small chicks just tipped me from knowing that plastic was a problem to doing something about it.

The 15 to 1000 years that plastic takes to break down in the environment seems a high price to pay for my convenience. Recycling is not enough, and rescue is not enough anymore. Time to actually change our habits and banish the demon plastic from our shopping as much as possible.

Planet Save has a helpful infographic at http://planetsave.com/2012/08/26/life-cycle-of-plastic-bag-infographic/ and a good factsheet on bottled water at http://www.cleanup.org.au/au/Whatelsewesupport/avoid-bottled-water.html

Plastic pollution is a global problem, but it can have a local solution. That local solution is me. In the coming weeks, we need to consistently and doggedly work at turning our plastic addiction around here at Shenstone, our sustainable house and garden. Today’s garbage tally makes it clear that this will not be easy, and some things, like our medications, can’t be replaced. The plan is to keep recycling those we can, and thoughtfully disposing of those we can’t. I will be following up with our local Council to find out what happens to such recyclables, and enquiring how I make sure my litter doesn’t fly off and kill a nearby calf or whale. But widespread plastic use surely can’t be sustained in a world where oil (the basic ingredient for plastic) is growing scarcer, and where climate change is threat enough to our birds, fish, animals and creeping things.

The bottom line is that it is unsustainable for all sorts of reasons. Time to really change habits and not just tinker around the edges. Less convenience, and more mindfulness of exactly what the consequences of our throwaway plastic society are is called for. My great grandmothers would be proud.